Your featured image is the main image for your article, and it’s often the first thing that a visitor sees before clicking through to your blog post. Whether or not that image makes a good first impression will play a big role in whether the visitor chooses to read the post or not.

A/B testing helps you to find out which featured image will work better to engage more people with your site, and reduce your bounce rate (the percentage of people who leave your site without engaging). WordPress doesn’t give you the ability to A/B test featured images by default, but you can do it with a simple plugin and by following the steps outlined in this tutorial.

To A/B test featured images in WordPress, you’ll need to follow these 4 steps:

Ready to get started? Let’s go!

Once you click on the Install Now button, it’ll change into a blue Activate button. Click on it to activate the plugin.

You will be redirected to the Plugins page on your WordPress admin.

If you face any issues in the installation, then check out this guide on how to install a WordPress plugin.

Step 2: Create a New Post or Edit an Existing One

Upon activating the plugin, you should go to Posts » Add New or edit an existing post to add your featured images.

Add two different featured images in the respective widgets and update your post. This plugin works to display one of the two featured images to your visitors at random.

Step 4: Go to Plugin’s Settings to See the Performance of Featured Images

Now you can see your featured image performance at Settings » A/B Settings Page.

You can also monitor the results of the A/B test on the post. Go ahead and edit your post in WordPress. You will see the Featured Image Performance widget on the right side of the screen. 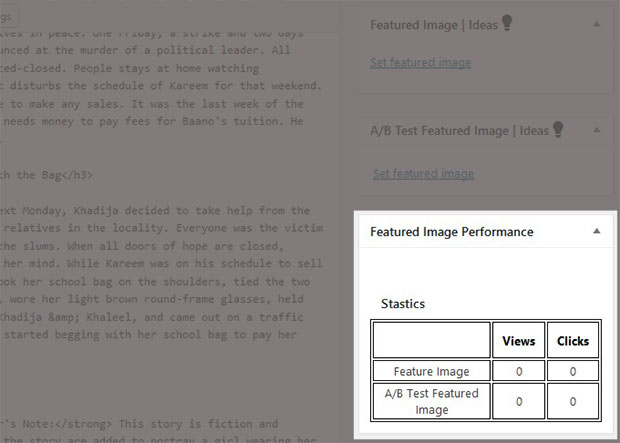 Once you have collected enough data and you have decided on a winner, simply use this featured image in your post and remove the one from A/B Test Featured Image widget.